Elmia Subcontractor has been a marketplace for the manufacturing industry for 40 years. Four decades of technical development, invaluable contacts, discussions and exchanges of knowledge, generating business worth hundreds of millions of euro. A winning concept for the whole manufacturing sector.

Elmia Subcontractor is Northern Europe’s leading trade show for subcontractors in the manufacturing industry, bringing together around 1,200 exhibitors and 15,000 visitors at Elmia in Jönköping, Sweden, every year.

Subcontractors are the backbone of industry. Elmia Subcontractor focuses on these innovative companies and puts them in the limelight. The fair is successful and appreciated by participants thanks to the business benefit it delivers.

The first trade show back in 1975 was called simply Underleverantör (Subcontractor in Swedish) and attracted 1,000 visitors. A modest start, but since then it has gone from strength to strength, with new successes every year.

Peter Magnusson, Managing Director of Hedbergs Mekaniska in Habo, has been coming since the beginning and has seen the event grow. Back then his mother was MD and, aged 18, he was helping out on the family company’s stand. He also remembers some special visitors to their stand in that first year.

“The King of Sweden came to our stand, along with county governor Gösta Gunnarsson. That was a big moment for us, even though it all went very quickly. We still have a photo of it in reception,” says Magnusson.

Hedbergs Mekaniska met what is now its oldest customer at Elmia Subcontractor in the late 1970s.

Over the years, Elmia Subcontractor has grown with the industry and is now not only the leading fair in Northern Europe for subcontractors to the manufacturing industry, but also the second largest trade show focusing exclusively on subcontractors in the world. International interest is increasing year on year.

“We are continuously working to develop the fair in constant dialogue with participants and trade organisations, in order to strengthen the significance of the event for the manufacturing industry. Elmia Subcontractor’s matchmaking forum, Connect, is a shining example, and in 10 years it has generated business worth 1.4 billion euro,” says Karla Eklund, Project Manager for the fair.

Subcontractor Connect gives suppliers and buyers from around the world a chance to build the foundation for valuable business in the future through short, effective meetings.

“Elmia Subcontractor meets an important need in the industry’s development, and in showing current and future opportunities. It’s great to host a marketplace with that kind of calibre,” Karla Eklund concludes. 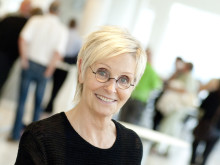 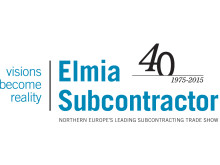