Jakob Hirsmark will become the new manager of Elmia’s forestry fairs. They include the world’s biggest international forestry fair, Elmia Wood, which is held every fourth year in the forests south of Jönköping, Sweden.

Jakob Hirsmark is 38 years old and lives in the town of Bankeryd, north of Jönköping. He has worked for Elmia for a number of years. He has experience of managing both national and international trade fairs, including the Water and Wastewater Fair, the Nordic District Heating Fairand World Bioenergy. He is also a certified forester, has experience in the forest industry and is a forest owner.

“Being in charge of Elmia’s forestry fairs is a dream job,” Hirsmark says. “I’m happy to have been giving this job but also humble at the idea of leading the world’s most important forestry fair.”

Elmia’s forestry sector is one of Elmia’s biggest business areas, with a series of well-known fairs and many well-established partnerships with representatives of the forest industry. As well as managing Elmia Wood, Hirsmark will also be in charge of SkogsElmia, MellanskogsElmia, which is held in partnership with the forest owners’ association Mellanskog, and Forest Romania, which is held in Romania.

“We’re pleased that we have the in-house expertise required for this job,” comments Camilla Danielsson, chief commercial officer of Elmia AB. “With his knowledge of both the forestry sector and the trade fair industry, Jakob will continue the development of the world’s biggest forestry fair, Elmia Wood.”

Jakob Hirsmark will take up his new post in February. He will continue to manage the Water and Wastewater Fair and the Nordic District Heating Fair, where work to recruit a new manager will now begin.

Elmia Wood will be held on 7-10 June 2017. The latest edition of the fair, in 2013, attracted 54,200 visitors from 50 countries. 530 exhibitors presented machinery, services and other products for forestry operations around the world.

MellanskogsElmia will be held on 19-20 August 2016 in the forests outside Sala, northwest of Stockholm. The fair targets forestry stakeholders in central Sweden.

Forest Romania is Elmia’s first forestry fair to be held outside Sweden, in Transylvania in the heart of Romania. The fair is jointly organised by Elmia and DLG of Germany and premiered in 2015. Forest Romania will next be held in September 2017.

As a meeting-place, Elmia enjoys a powerful position – at the heart of the Nordic region where people and companies either have or are looking for new ideas, products and services. 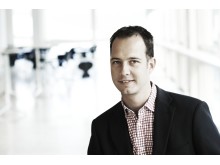 Jakob Hirsmark will become the new manager of Elmia’s forestry fairs. They include the world’s biggest international forestry fair, Elmia... 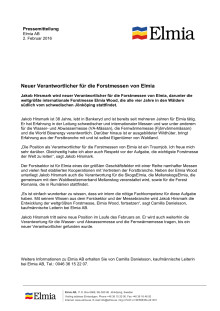